There is a huge range of different men's underwear available, from your everyday essentials through to styles that are a bit more sexy and daring. Sexy men's underwear comes in all shapes and sizes from your more sophisticated and sexy to men's underwear that is just downright kinky. If you are looking for sexy men's underwear then it doesn't get much sexier than a male thong. The PPU Underwear Bulge Pouch Thong.
This mens thong is fairly traditional in its overall cut and style, its mid to low-rise on the waist with a wide bikini style cut overall. The rear has a wide Y shape thong strap at the back with the top section sitting outside your bum cheeks so it has good structure and support. The sides have a wide bikini style to them, but as they run around to the front they cross over leaving a cut out section where the traditional pouch would be. Instead the pouch is attached by straps. This creates a bulge effect as the pouch encases your manhood.
They are made from 93% Nylon / 7% Spandex and come in a choice of black or turquoise with a contrast black pouch.
This male thong has a really solid construction that is wider than many mens thongs. This gives it a lot structure and support. Its a bit like a bikini brief but with a thong rear that leaves your bum cheeks bare. The way that the pouch is constructed with the separate section and the cross over section will enhance the look of your bulge.
Sizing Information 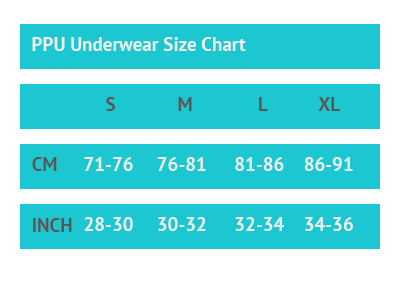