The choice of men's underwear styles continues to grow and as the idea of gender becomes more fluid there is more crossover between what was considered to be traditional male and female underwear styles. But the idea of men wearing lingerie or even the idea of lingerie designed for specifically for me is not new. Here at Manhood Undies we pride ourselves on providing the full range of underwear for men. If you're looking for a sexy male lingerie style bodysuit then you are going to love the CandyMan Underwear Open Side Mesh-Lace Mens Thong Bodysuit Thong.
The CandyMan Open Side Mesh-Lace  Bodysuit Thong is a one piece similar to a leotard that is pulled taut from tension from the two over the shoulder straps connected by the one piece of material that is stretched from the crotch. The pouch cuts in tight with a cup style and has panels of mesh and lace that run up the body. The front had a deep rounded neck with two wide strap going over the shoulders with a deep cut on the back all the way to the thong rear. The bottom of the cuts up high with a thong rear with the upper part outside th cheeks and the lower sat in between your bum cheeks leaving them bare.
This male bodysuit is made from lace and sheer mesh microfiber material that is 78% Polyamide / 22% Elastane that has good stretch. It comes a classic and sexy in black.
If you are making your first foray into the world of mens lingerie then you cant go wrong with this male bodysuit. It has a tight figure hugging fit that stretches well and shows off a hint of what's underneath with the sheer mesh stripes. The pouch pulls in tight accentuating your bulge for a style that creates a nice balance between masculine and feminine styles of underwear.
Sizing Information 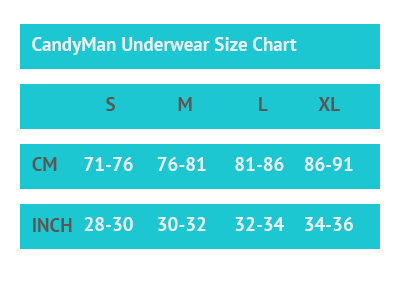